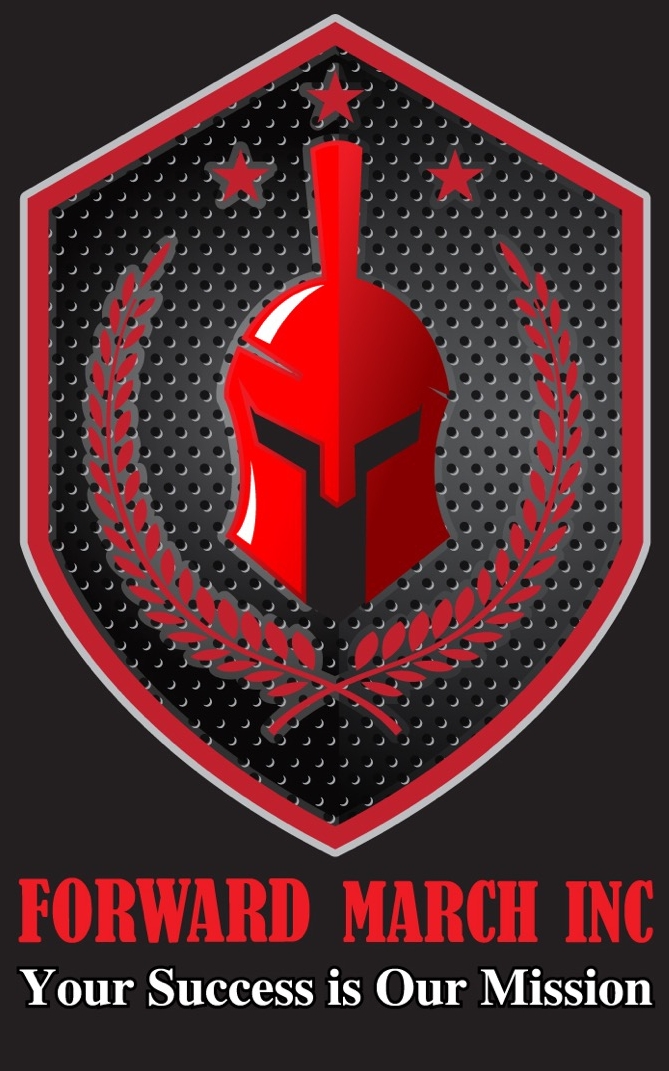 Have you thought about being your own boss?

One of the most difficult adjustments for veterans returning to a civilian lifestyle is the matter of finding a job. It’s difficult to find many positions where the particular skills developed through the military transfer to civilian job skills. Starting your own business provides hope for veterans who want to break into the private sector.

Owning a franchise is a great jumping-off point for many veterans, becoming a popular choice for those looking at getting started in business with military experience. There are plenty of reasons that make opting for becoming a franchisee an excellent choice. Top reasons include:
Owning an established businesses
One of the most difficult adjustments veterans face in moving into business ownership is the learning process. Veterans are used to working within established frameworks, with time-tested rules and training to support them, which might not be all there in smaller companies and upstarts.
A franchise system is an already established and functioning system, often complete with its own training systems and operations manual. Joining one means joining a brand that’s already been perfected: no legwork to establish credibility needed. This takes the stress off of veterans and allows them to readily fit into a culture of hard work where their skills shine.
They’re trained to follow orders and practices
Franchise ownership isn’t just about managing a business and employees. It’s committing to a set of guidelines to help the franchise grow. Veterans are used to such roles; taking charge to lead teams while also having the training necessary to understand the importance of following rules regardless of circumstances.
Veterans excel at putting plans into place and following through with the execution, finding a proper niche for themselves in the chain-of-command. There is little worry that a veteran will struggle with grasping the position or find it difficult to carry out what corporate wants from them.
Most franchises provide them with discounts
As more veterans are turning to owning franchises, more franchises are choosing to give back. Many franchises are offering discounts to veterans on franchise fees. VetFran, a program affiliated with the International Franchise Organization, reports over 500 franchises giving discounts and benefits to help veterans get their start in owning a franchise.
Other incentives offered by companies include discounts on application and inventory fees, as well as other benefits dependent on the company. It’s worth doing research on any franchise opportunity; you never know what incentives might be available.
They don’t have to start a business
Working in an established business is a lot easier for most veterans to grasp than the alternative. Though both require investing time and resources, there’s significantly less risk involved in veterans who want to own a franchise compared to those who favor building a company from the ground up. Benefits notwithstanding, franchise ownership is often easier for veterans who want a place they can put their skills to work immediately, rather than starting over from scratch.
While both options might be an investment, the risk is lower and the rewards are greater for veterans who choose becoming franchisees.
They create their own executive-level opportunity
Joining a company at a menial job or entry-level from a position of leadership in military service is often a difficult and disheartening leap. Owning a franchise allows veterans to create their own executive role, rather than starting over from the bottom of the corporate ladder.
This kind of role tends to suit veterans better, and allows them to have better opportunities than if they were to go to work for another business while avoiding the difficulties of starting their own.
Veterans have plenty of options when it comes to integrating into civilian life, and franchise ownership has become an outstanding option; companies are finding that veteran-run franchises are performing extremely well, if not better than, those run by non-military owners.
These sorts of benefits serve to only sweeten the deal for veterans: they have options to put what they learned in the military to use while also making their move into business quicker and easier than ever before. On top of that, benefits to veterans make this kind of opportunity affordable to those veterans just starting out.
Become your own BOSS - Own a franchise! 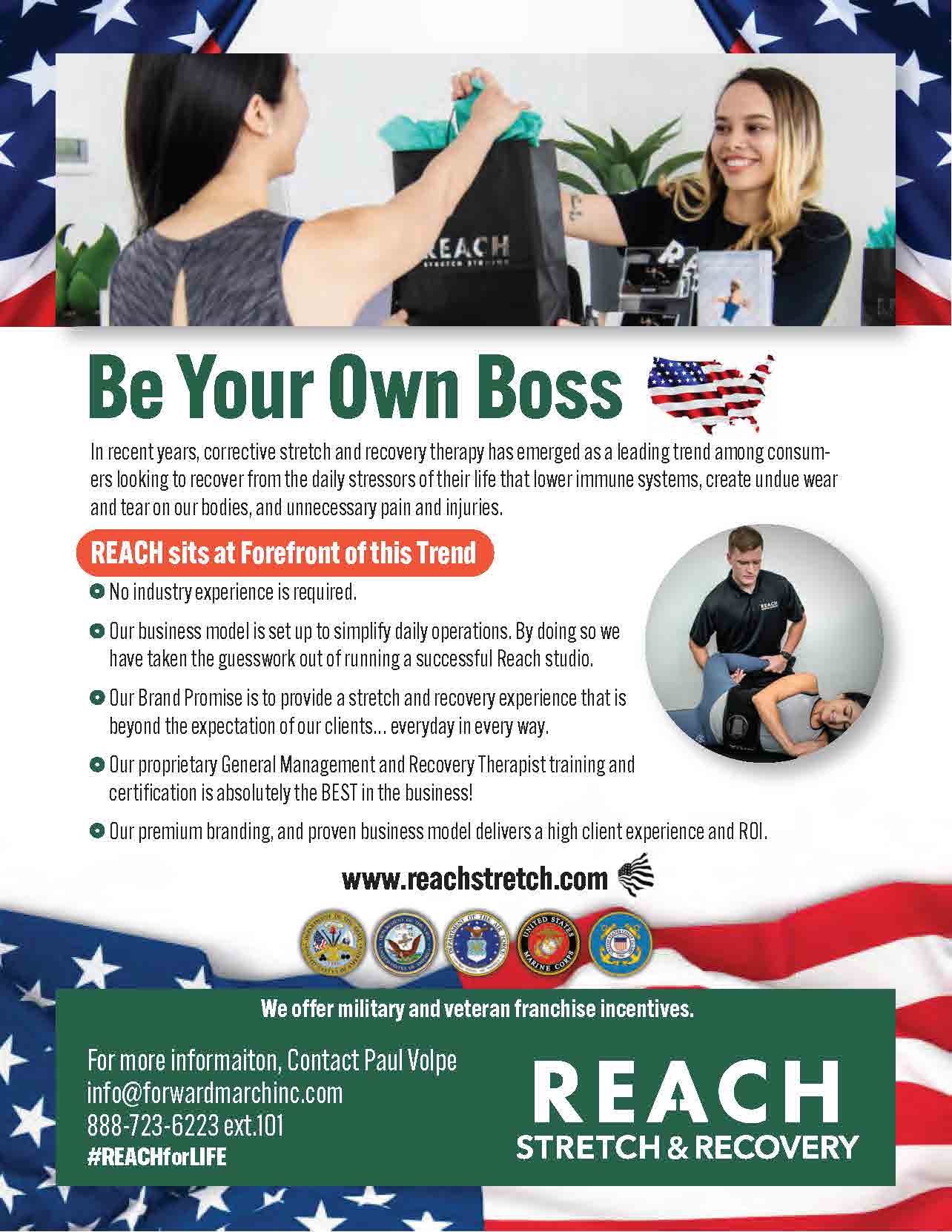 To provide personalized, restorative total body recovery therapies that help restore your body’s natural range of motion, relieve pain and stress, and improve flexibility and movement performance. Our goal is to get you back to doing things you love to do…
Feeling Better and More Energized than Ever!

Why Reach Stretch & Recovery For Veterans

The ability to still serve

Welcome to one of the most exciting, rewarding, & FUN business opportunities in the U.S. and around the word – owning your very own Fred Astaire Dance Studios® location! Since 1947, we’ve set the standard in ballroom dance excellence. And today, our network of over 180 dance studios continues to transform lives through the positive power of dance. We’re proud to offer our Students & Staff a studio environment that is welcoming, 100% non-judgmental, and truly joyful! Join us – and build a lucrative future that blends classic elegance with modern-day energy, and gives you the 21st century business tools to succeed.

Step into a Fun & Exciting Future!

For over 75 years, Fred Astaire Dance Studios® has been the premier brand in ballroom dance instruction. And today, our programs offer Students more fun and options than ever, while continually maintaining the high standards of our proprietary curriculum (developed by Mr. Fred Astaire himself). We provide comprehensive tools and training, plus the ongoing support you need, to create a successful entrepreneurial business.

ARE YOU TIRED OF EXPENSIVE LAWN MAINTENANCE AND LOUD TRUCKS LINING YOUR STREET?

Pahj Services will cut the entire street in one day. Less congestion, less noise, cleaner and safer streets for families and children to be outside.

Today’s transitioning military men and women are of the highest caliber in US history with regards to their training, their leadership development, and their varied skill sets. FMI stands ready to help your organization find, hire, and retain the perfect veteran for your employment needs. Today’s veterans will bring a wealth of experience, talent, and energy to your company. FMI specializes in providing:

Leader development defined: Leader development is the deliberate, continuous, sequential, and progressive process grounded in military values, that grows service members and civilians into competent and confident leaders capable of decisive action. Leader development is achieved through lifelong synthesis of the knowledge, skills, and experiences gained through institutional training and education, organizational training, operational experience, and self-development. Commanders and other organizational leaders play the key role in leader development that ideally produces competent, confident, and agile leaders who act with boldness and initiative in dynamic and complex situations. Leaders create the standard, enforce and execute the standard – Lead by example.

Our mission is to provide outstanding consulting and training designed to create a more productive, motivated, and focused staff based on a proven military leadership model and a systematic, building block approach to organizational success. FMI can assist your organization in a variety of strategic business solutions:

Do you want a more productive, motivated, and focused staff? Camouflage to Corporate is FMI’s conference, which will give you the information and tools you need to succeed in hiring the very best military candidates. Our highly successful solution is based on the proven military leadership model and a systematic approach to organizational growth.

Contact FMI today to learn more about how Team FMI can help your business or organization grow a productive, motivated, and focused team. 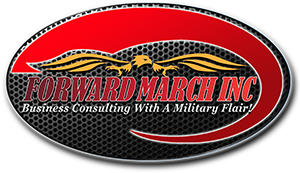